Benjamin Folke Thomas is a Scandinavian-born singer-songwriter from Gothenburg. After living and playing in London for some years, where he proved to be one of the most exciting prospects coming out of the acoustic scene, he’s currently laying low on a Swedish island prior to playing some German shows and returning to the UK for a headline London show and an appearance at the Cropredy Festival. In autumn 2013 he released his first studio album Too Close To Here. It was mainly recorded with Swedish musicans in the Rosa Huset (‘The Pink House’) outside Gothenburg. BJ Cole plays dobro on ‘Extend No Greeting’ the one cut recorded in London.

A  drummer in a grunge band his life was transformed when he heard Kurt Cobain singing ‘In The Pines’ on Unplugged. Steeping himself in Leadbelly, Dylan, and Leonard Cohen, by the age of 20 he was an accomplished finger-picker, confident performer, and mature songwriter. Jaded Londoners didn’t know what had hit them when they first heard songs like ‘Paradise Lost (Heaven Found)’, and saw this robust performer with a stage presence of the Bob Dylan of two decades ago.

Folke Thomas’s live ability has attracted a dedicated fanbase and rave reviews, including Q Magazine (“stunning playing… his finger-picking is the best you will ever hear”) and The Guardian (“stands out like Oliver Reed at an AA meeting”). In an attempt to capture his talent on record, Bucketfull Of Brains released his eponymously titled EP in 2010, described by Stewart Lee the Sunday Times as “a convincing called card…reminiscent of Greenwich Village circa 1965.”

Tours followed (including support slots for with folk duo Trevor Moss & Hannah-Lou and ahab.) and a string of festival appearances including Glastonbury, Green Man, Larmer Tree and No Direction Home. Growing acclaim led to interest from high-profile music charity Strummerville (instrumental in the careers of many established musicians including Bastille, Anna Calvi and Frank Turner), who in 2012 organized the release of the showcase live album Equinox…Live at the Hawley Arms.

“A stunning collection of songs that… sonically pervades a road somewhere between country folk and acoustic driven rock. Thomas is a wordsmith, pure and simple, a conjurer of tales that reference all manner of things – literature, mythology, and religion… He is one of the finest young talents out there and surely on a journey to the stars.” – Folk Radio UK

“A supremely confident and brazen display of talent. Benjamin Folke Thomas seems to have debuted with his gifts fully formed.” – Americana UK

“The album has a watermark of quality that suggests a veteran operator at work the songs are beautifully constructed and produced.” – Beat Surrender

“A new UK artist…you should check out is Benjamin Folke Thomas. If you like Nick Drake, John Martyn, Van Morrison, Blood On The Tracks Dylan, then you will love…”  – Simon Raymonde – Bella Union Records 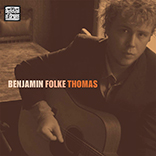